Looking for a reliable canister filter for a 75-gallon fish tank? When your hang on the back filter just won’t do the job, you need a more powerful canister filter. For a 75-gallon tank, you’ll want a filter that is rated for 150 gallons. You want to make sure that your filter can easily handle 75 gallons and not be maxed out. It should turn over the tank at least 4 times an hour and hold enough media to eliminate all the waste.

You may have heard that canister filters leak and some do, so you need something reliable enough where you don’t have to worry about the unit leaking or stop working.

Today I want to compare two popular canister filters that work for a 75-gallon tank. The Polar Aurora, and the Marineland Magniflow. Both units are powerful enough to handle the job of filtering a 75-gallon tank. One comes with a built-in UV light. More on that later. 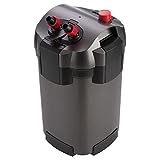 The Magniflow is a newer version from the C series. They upgraded the priming button to make it easier to prime the filter before use. Also, the latches for the top are all the same, so it doesn’t matter which way you put the top on because it will fit and latch. Before, the top had to go on a certain way.

The filter comes with seperate o-rings for the top cover and media trays, so make sure you install those correctly or you’ll have a water mess on your hands. This filter also comes with coarse and fine mechanical filters, ceramic rings and bio balls for bio media, and carbon filters for chemical filtration. Pretty standard. You probably want to change the bio balls for a better biological media like ceramic or lava rock.

Marineland is known for their great customer service and all their canister filters come with a 3 year warranty. They stand behind their products which is a real plus.

The Marineland filters are reasonably priced with he average price for the 360 around $150.

Now the Magniflows seem to have some issues involving the intake and output valves. They tend to leak air because the hoses don’t seal well with the connectors. Generally, this can be solved by applying silicone and using metal clamps instead of what comes with the filter. Also, there seems to be somewhat of a design flaw with some plastic flaps under the primer assembly that rattle.

Overall the Marineland Magniflow is an OK canister filter. They seem to have scrimped in certain areas that cause some problems. These can be fixed however. Their customer service is good which is definitely a plus. The design is better than before in that it’s easier to put back together after maintenance. Just make sure the tray holes line up on all of the trays so water will flow through. I think for the money, you can get a lower cost filter that is just as good. 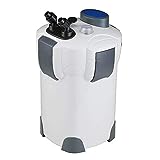 The Polar Aurora is basically a cheaper version of the SunSun canister filter. If you’re on a budget and want a cheap, decent filter then this one is probably the cheapest available. The average price is $75. Keep in mind there are trade-offs to the low price. Namely, the parts are somewhat cheaply made so you have to be careful when disassembling the filter.

The Polar Aurora comes with a UV filter built in the unit. The UV light, while seems to be a good idea is actually problematic in that it tends to get too hot and melts the plastic trays. Also, moisture tends to get in through the bulb seal and could possibly short it out along with the whole filter. I don’t even use it because of that, so it’s kind of a wasted feature.

The filter is very powerful. I mean it moves a ton of water through my tank. Even more than the Marineland Magniflow. It will clear your water in no time.

It also has 4 media trays which is nice. You can add additional bio media or something like Seachem Purigen or a Phosphate absorption pad. You could even use the bottom tray for ceramic rings to capture the big muck. There are lots of options

Customer service is also good. I’ve never had a problem with replacement parts if something breaks they’ll send one out right away.

Overall, this is one of the best canister filters you can get for the money. If you ever have a problem with defective parts, just call up the company and they’ll replace it. The only knock on it is the problematic UV light. If you do use it, just make sure you lock in the bulb assembly so that it creates a tight seal.

Overall, for the money, the Polar Aurora is the better buy for how powerful it is and the ability to modify the media to improve the filtration.

Check out the Polar Aurora here.

I love the aquarium hobby. I designed this site as a resource for beginners. I answer the questions that most new people have. If you have more questions please leave a comment. I hope you enjoy the site and get something valuable out of it.

HOB vs Canister Filter: Which is better?

Marineland Penguin vs Aquaclear vs Fluval

thefishtankguide.com is a participant in the Amazon Affiliate Program, an affiliate advertising program designed to provide a means for sites to earn advertising fees by advertising and linking to amazon.com.